Wondering how to catch bass? Did your fish disappear? This is a great time of year if you know where to look! Bass are incredibly predictable in the Late Summer and Early Fall so use these tips to your advantage. In this video we break down where the bass position, the best time of day to target them, as well as a few confidence baits to make your life easier.

By focusing your efforts during peak times you maximize your time and avoid a great deal of frustration. Intentionally focus on reaction baits early and late with your biggest push at finesse between 9 and 11 AM. The early afternoons are typically a bit slower this time of year so don’t let the lull in action discourage you from continuing into the evening.

We have a few key confidence baits that we lean on through the transition. Those baits are outlined below… 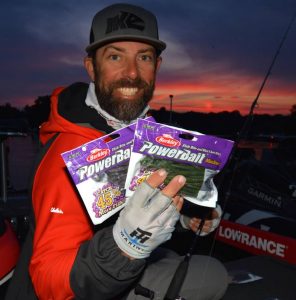 All bass use a wide variety of their senses to find their prey, but smallmouth primarily use two — sight and smell. We’re going to save the sight part for another day. Right now I want to talk about scent.

I’ll start by telling you that I never fish with a plastic bait that isn’t scented or to which I haven’t added scent. That’s an absolute rule of mine. Never means never, not ever. It wouldn’t make sense. I want the smallies to smell something attractive and I never want them to smell me or anything I might have on my hands or in the boat.

You see, the scent thing works two ways. A good scent brings them in and gives them confidence that what they’re attacking is real, that it’ll be good to eat. A bad scent — soap, sun block, aftershave — will do just the opposite.

So what you want to do is get rid of the bad by never using regular soap or sun block on your hands and by washing them with scent free soap. You can protect your hands with gloves and you can get scent free soap almost anywhere hunting supplies are sold.

The best good scent I’ve found is the one that’s used in the Berkley Powerbait Maxscent lures. I’m not a chemist and I don’t play one on TV. I’m not going to tell you how they made Maxscent or what’s in it. However, I am a pretty good angler and I do sometimes play one on TV. I can tell you the stuff works. It gets them going and it disperses quickly into the surrounding water.

Berkley’s line of Powerbait Maxscent lures comes in an almost endless array of shapes and sizes. My preference for drop shotting is either a 4-inch Flat Worm or a 4 1/2-inch Hit Worm. They look like the real thing to me and they seem to catch more brown bass in the waters I’ve fished them, and that’s darn near everywhere in the country.

They’re offered in a super number of colors, nine or 10 at a minimum. Pick one to start and then swap them around if that doesn’t work. If you only get a couple of colors, I suggest black or green pumpkin. They’re pretty much universal.

I used both baits as my go-to lures at the 2018 Huk Bassmaster Elite at St. Lawrence River presented by Black Velvet a couple of weeks ago, and they worked just like I thought they would. I finished 28th in that event, and I’m proud of it.

And, speaking of the St. Lawrence River, I’m telling you that if you want to catch giant smallmouth in giant numbers figure out a way to get there. I’m not kidding — Becky and I are thinking about looking at property up there. It’s unbelievable.

In the meantime, think about scent the next time you chase smallies. If you do, you’ll catch more of them.

Do Red Hooks, Feathered Trebles, and different retrieves make a difference? Matt explores these tricks and more as he teaches how to catch more topwater bass this late Summer and early Fall. Do you want to catch bigger bass on top? This will make all the difference!

As Spring turns to Summer the bass become more wary of topwater lures. As Summer fades to Fall it can be downright tough to fool the bigger fish. Making these subtle changes will maximize your opportunities and in some cases, will actually get you more bites.

Bladed jigs have become a very popular bass fishing bait since they exploded onto the scene from Ron Davis’s workshop a little over a decade ago. The only downside to them, however, is how easily they snag wooden cover like brush piles, laydowns or docks.

Because of the big exposed hook and design of bladed jigs, if you cast them into gnarly wooden cover there is a high probability you’ll become snagged.

That changed for pro angler Terry “Big Show” Scroggins once he figured out how to make his vibrating jigs weedless. Although he was reluctant about it, Scroggins has agreed to share his process after a few years of keeping this tackle tweak hidden from the public eye.

The thought process behind it

Being a Florida native and no stranger to fishing lakes with an excess amount of grass, Scroggins fishes with a Chatterbait very regularly. It was after one successful day of bladed jig fishing during a Florida winter that got Scroggins thinking about making his ChatterBaits more resistant to hang-ups.

“A buddy and I had spent the day on a little lake in Central Florida and we caught the heck out of them on Chatterbaits,” Scroggins said. “We were fishing around a few brush piles in 8 feet of water and the bass were loaded up. The biggest bass we caught came on a Chatterbait, but the problem was we had to break off a lure every few casts because we kept hanging up in the brush. While driving home that night I couldn’t stop thinking of a way I could make bladed jigs more weed less.”

Using nothing more than a power drill, a tube of marine epoxy and a spool of 200-pound monofilament, Scroggins discovered a relatively quick and easy method of accomplishing his goal.

Scroggins starts by taking the skirt off of his Chatterbait and then uses a 3/32-inch drill bit and a power drill to create the holes for his weed guard to sit in. He has found a 3/32-inch bit is perfect for the 200-pound mono he likes to use. Depending upon what you use for your weed guard, this may change.

Scroggins advises using a drill bit slightly larger than what you intend on using for a weed guard. While Scroggins is partial to heavy monofilament line, he has also experimented with weed eater string along with thin, pliable wire as weed guards.

Scroggins settled on monofilament for several reasons. It’s much cheaper than other options and it’s also clear, so it doesn’t change the overall profile of the lure. It’s also stiff enough to deflect snags, but pliable enough that he can form-fit his weed guard to whatever shape he chooses.

“Start by drilling two shallow pilot holes straight into the head of your Chatterbait,” Scroggins said. “Start slowly and even add a little beeswax or Vaseline to your drill bit so it doesn’t try to run on you. Once you have the two holes started, move your drill bit to the angle you would ideally have your weed guard sit, and drill into the head of the bait 1/4-inch or so. You don’t want to drill all the way through the head, obviously, you just want a deep enough hole for your weed guard to sit in.”

Place your weed guard
After his holes are drilled, Scroggins rolls one end of his two weed guards in marine epoxy and then simply places them inside his Chatterbait head.

“The epoxy only takes about five minutes to dry,” Scroggins said. “Let your bait sit and dry for three or four minutes until your weed guards are mostly set. Then with your last 60 seconds or so you can gently move your weed guards around so they lay out exactly like you want them to. Start by using a weed guard that’s a little too long and then trim them with a pair of scissors after the epoxy has dried.”

Once your epoxy has dried, add your favorite skirt color, a soft-plastic trailer and your bladed jig will be ready to meet the deepest, darkest, hidey holes a bass calls home.

Is it worth it?

Realistically, this tackle tweak is not something you need to do to every vibrating jig you own. Adding a weed guard is strictly situational for Scroggins. If he is planning on fishing open water or a grass flat, Scroggins won’t make any adjustments to his bladed jigs whatsoever.

However, if Scroggins is fishing a Chatterbait around dock cables or heavy cover he won’t hesitate to add a weed guard. The increased snag resistance gives Scroggins the confidence to make pinpoint casts in hard to reach places, in addition to assisting the lure to come through snags more easily. Therefore Scroggins is able to put his vibrating jigs in places bass aren’t used to seeing them, resulting in more bass in the boat.