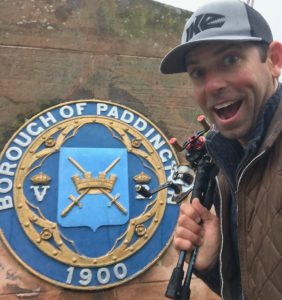 Ok, so we’re in London, England, this time. This was the first time I’ve ever been there and I have to say that it’s awesome, really cool for a guy from Philadelphia. I’m going to go back in the near future and take Becky with me. There’s no doubt that she’ll like it as much as I do.

Let’s talk fishing: Our targets are English Pike, Barbel and European Yellow Perch. You saw most of it on TV last night but I’m guessing you’d like to hear a little more about exactly what we did and how we did it.

They are basically like our Northern Pike except that they live in England. A big one will weigh 30 pounds. A giant will tip the scales at 40 pounds, maybe a little more. There are reports, however, of some in the 50 pound class but those reports can’t be verified. They’re either too old or the scales weren’t certified.

We fished the Thames River for them on this trip. It was cold and the fish were very lethargic. That made catching them a challenge,
but we did manage a few.

Our primary lure was a Berkley Powerbait Hollow Belly Swimbait — 6-inch version — rigged on a VMC Ike Approved Heavy Duty Swimbait Hook. The hook was a 5/0 and the weight was 3/8-ounce.

We used the big 6-inch version of the swimbait. These fish feed big so we wanted to match the hatch as close as possible

This was tough fishing. The only way we could get a bite was to slow roll the swimbait along, right on the bottom. And when I say slow roll, I really mean
s-l-o-w. It was just barely moving.

We managed to catch several with our best fish weighing 24 pounds. In the English Pike world that’s not real big but it’s not a dink, either. They fight hard even in the cold water. We had a ball catching them. It was a fun part of the trip.

I’m guessing very few of you know much about the barbel. I didn’t either until I went to London and fished for them. The best way I know to describe them is that they’re kind of like a small carp. They like heavy current, feed on the bottom, and they don’t bite artificial lures much. A good size one will weigh in the teens.

We went after them in the River Wandle just south of London.

Our rig was basically a Carolina Rig, not really much different from what bass anglers fish with all the time. We used a No. 2 VMC Drop Shot hook, a sliding weight, a swivel and a stop. Our main line was 20-pound-test Berkley 5X Braided Line. We attached a short leader — something like 2 feet long — using Berkley Trilene 100% Fluorocarbon to it using the swivel in between the two.

Our bait: This is the part where I don’t want you to laugh, at least not too hard. We used Spam. I’m telling you — it worked. A giant gobbled it up, I mean right now. You could almost hear her smacking her lips together in delight as she fought to stay out of our boat.

We only caught one but it was a true monster. We didn’t put it on our scales but I’d guess it weighed in the high teens. It was definitely pushing 20 pounds.

Question: Do you think channel cats would eat Spam? I wonder…

European yellow perch aren’t much different from the yellow perch we have over here. They look about the same and have the same general lifestyle and feeding habits. But, there is one major difference. They grow much bigger than ours. A lot of them you catch will be in the 3 pound class and a true giant may go up to 6 pounds. You won’t see that in the United States or Canada. Ours just don’t grow that big.

We were cursed with a nasty cold front the day we went after them. That made the fishing really tough. We didn’t catch any.

I’d like to tell you something different but, as you know, my shows are real, authentic in every respect. We don’t fake anything. We’re proud of that. And, we have tough days just like you. Every angler does. It’s nothing to be ashamed of and it’s nothing you should lie about. I won’t, not ever.

We fished the canals and waters around Canary Wharf. It’s a really cool place — lot of shops and financial institutions. I have to say that visiting it was worth the whole trip to London.

London is a really neat place to visit. It’s historic, but modern at the same time. The fishing is good despite our struggles with the European Yellow Perch. It’s different from what we have here in the States. And, if you decide to take some time off away from the water there’s plenty of other things to do with your family before bedtime.

﻿Eric Jackson and Vantage Cinema present a story about snowboarding, fly-fishing and finding alignment in the mountains. Filmed primarily on location in Northern BC, Alignment …

The trail is now set to visit Alabama’s famed Lake Guntersville on June 21-24 and Cayuga Lake in New York on Aug. 22-25.

When the Elite Series schedule was announced in July, two events were originally planned for the Western United States on the California Delta and the Columbia River in Washington. But after listening to anglers’ concerns about travel expenses and time away from their families, two venues that are more conveniently located to the anglers were selected.

“While it is our goal to take the Bassmaster Elite Series to new venues across the country, we are also very sensitive to the needs and wishes of our anglers,” said B.A.S.S. CEO Bruce Akin. “Many of them had legitimate concerns about the travel demands of our original schedule, and that was the basis for this decision.

Scottsboro, Ala., will be the tournament headquarters at Lake Guntersville, which ranked ninth on the 2018 list of BassmasterMagazine’s 100 Best Bass Lakes. It has been the site of 22 major B.A.S.S. events, including the 2014 Bassmaster Classic. The lake is known for giant largemouth and aquatic grass that makes for excellent summertime fishing.

The official practice period for the Guntersville tournament will begin Tuesday, June 18. The competition days will be the following Friday through Monday (June 21-24).

Cayuga, which is New York’s longest glacial finger lake at just under 40 miles, ranked 13th in the Northeastern Division of Bassmaster Magazine’s 100 Best Bass Lakes. The fishery has hosted three major B.A.S.S. tournaments, dating back to 2012.

The Cayuga tournament dates of Aug. 22-25 were chosen specifically to cut down on anglers’ travel time. The Elite Series already has an event scheduled for New York’s St. Lawrence River on Aug. 15-18.

The official practice period for Cayuga will begin Aug. 19, the day after the St. Lawrence event ends.

“Guntersville is widely known as one of the best bass fisheries in the country, and it’s very centrally located for many of our competitors,” Akin said. “Cayuga is also an excellent fishery, and the timing of that tournament will allow our anglers to make one great trip to the Northeastern United States.”

The Cayuga event will be hosted by The Village of Union Springs with weigh-ins held at Frontenac Park. The City of Scottsboro, Ala., will host the Guntersville Elite event, which will be held at Goose Pond Colony Resort.

A short film showcasing some of the world’s finest fly fishing for big Atlantic salmon on the Yokanga River in Russia.

The post Salmon Fishing on the Yokanga, Russia appeared first on Moldy Chum.

Wild steelhead and Chinook salmon counts are back near their desperately low post-dam-building numbers. Having spent 40 years advocating for wild fish in Idaho rivers, …

The post A Spiritual Loss appeared first on Moldy Chum.

Ken Weeks owned a 900-square-foot apartment in Manhattan’s Alphabet City in 1999, but he was ready to party like it was 1799. Weeks worked at the Metropolitan Opera, which specializes in spectacle, as a scenic artist and designer, but he had a growing hankering to build a birchbark canoe. One of the Met’s singers said,

The post The Colossal Canoe: Inside the Maine Barn of Birchbark Builder Ken Weeks appeared first on Canoe & Kayak Magazine.

A look inside 18-year-old Alex Martin’s first solo sea kayak circumnavigation of Lake Winnipeg, over five weeks and 1,100 miles exploring the wild and threatened sides of the Manitoba lake.

The post Paddling With a Purpose on Lake Winnipeg appeared first on Canoe & Kayak Magazine.

In 2017, Susan and Adam Elliott hit the road in Gilly, their 24-foot RV with a wave-curling logo and “Wild River Life” stenciled on the side. Their goal was not just to paddle 50 of the “most beautiful, most wild, most scenic, and most beloved rivers across the country” but to inspire other paddlers to