As reported in the Auburn Citizen Newspaper on Wednesday the Elite Series is adding an event on Cayuga Lake that will take place August 22-25 next year.  It will be

With all of the announcements being made about anglers leaving their respective organizations for full time participation in Major League Fishing there are some people being forgotten.  How about those

Colorado Blade Spinnerbaits and Black Worms are history! Here’s what you need to know about night fishing today! We’re covering colors, moon phases, and a variety of lure styles that will change how you fish for Bass in the dark.

Are you ready to catch bigger bass at night? Tired of the same old results? Don’t throw the same lures as everyone else! Its time for wake baits, chartreuse crankbaits, swim jigs, and more!

Ever wonder what Fish look like on your fish finder? In this video Tim explains what to look for and breaks down the basics of today’s Sonar units. Understanding your sonar unit, the transducer, and “Cone Angle” is very important to painting a complete picture below the surface.

Today, most sonar unit’s default frequency setting is 200kHz (Purple Beam). At this frequency, the bottom area that the sonar cone is covering is approximately 1/3 or 33% of your overall depth. An easy number to remember is at 30 feet deep, your sonar cone is scanning 10 feet wide. Another example – at 15 feet your sonar is scanning a 5 feet cone. In a later video we will explain how to change and adjust these frequencies.

Here is the gear Tim is using…

Do Red Hooks, Feathered Trebles, and different retrieves make a difference? Matt explores these tricks and more as he teaches how to catch more topwater bass this late Summer and early Fall. Do you want to catch bigger bass on top? This will make all the difference!

As Spring turns to Summer the bass become more wary of topwater lures. As Summer fades to Fall it can be downright tough to fool the bigger fish. Making these subtle changes will maximize your opportunities and in some cases, will actually get you more bites. 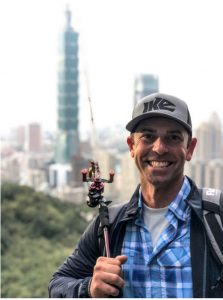 OK, so hopefully everyone had a chance to watch the first episode of FISH MY CITY WITH MIKE IACONELLI on NAT GEO WILD last night. If you had as much fun watching it as I did making it, you had a ball.

Here’s the thing about shows like that–they are real. We don’t fake film footage and we don’t cover over our mistakes or our struggles. We show it all, good and not-so-good. You get to experience fishing just the way it was at the time.

The one about New York City fishing was especially fun for me. I grew up fishing around the Philadelphia metropolitan area. It’s a lot like New York. There are millions of people but there are also lakes and rivers that offer great fishing opportunities. Too many people don’t know about that. But now they do, and that’s in large measure due to this project.

Here’s a detailed breakdown of what we showed you last night that’ll give you some more things to think about. We’ll start by talking about the stripers, then we’ll move on to flukes and from there we’ll chase blues. And, as a special treat we’ll look at bass fishing in Central Park.

We targeted stripers in the Hudson River. They’re migratory. They move from saltwater to brackish water and sometimes they can be found in freshwater. We went to the Hudson because they had traveled up the river to spawn and were on their way back down as they headed out to sea.

Because they were postspawn fish we figured they would be traveling slow and eating fast. We were right. These are big fish so we went after them with big offerings.

We targeted traditional bass-type structure and cover. Stuff like rock piles, jetties, whatever laydowns we could find, and anything that made a current break got our attention. We had our best luck around wooden pilings.

One approach was with live bait. Stripers frequently feed on bunker minnows. For those of you who aren’t familiar with bunkers they are kind of like big gizzard shad. We fished them on a traditional live line — no lure, no weight — just a hook and a bunker swimming around. That didn’t work.

Our most successful attack came with a Berkley Powerbait Hollow Belly Swimbait rigged on a 3/4-ounce VMC Ike Approved Swimbait Jig Head. We used the big 6-inch version of the swimbait in a bunker (shad) color. These fish feed big so we wanted to match the hatch as close as possible.

You saw for yourself last night how effective our lure and tackle choices were when things were on the line.

We headed up to the East River for our fluke excursion.

Now, flukes are a weird kind of fish when you think about them from the perspective of a bass angler. They’re like chameleons in that they can change the color of the top of their bodies in no time flat. But, their bellies are white so they blend in with the sky to keep predators from seeing them from underneath.

They’re also kind of interesting because they live up to 20 years, a long-long time in the sea and they get bigger than you might think. They grow up to 20 pounds. The ones we caught weren’t that big but we were hoping for one that big all the time we were fishing for them.

The best overall description of them is that they’re like a giant flounder.

Flukes will eat almost any small living creature and they’re mostly bottom feeders so we fished for them with 1/2 and 3/4-ounce VMC bucktail jigs. We tried both white and chartreuse. White was by far the best color for the day we were fishing. And, they worked a lot better when we tipped them with small pieces of squid or with strips of fish belly.

Once again, our tackle was the kind of stuff that every bass angler owns. My rod was 7 foot, 4 inch medium heavy Abu Garcia Ike Approved casting model. My reel was the same as for the stripers except that it was spooled with 20-pound-test fluorocarbon instead of 25-pound-test.

The best place to find these bad dudes is up in Jamaica Bay.

When I say bad dudes, I mean just that. They grow up into the 20 pound range. The big ones are called “gators” for good reason. They come armed with a set of nasty, razor sharp teeth that will, or should, scare darn near anything that swims and any angler that handles them.

They’ll eat almost anything as long as it’s alive and the adults typically feed in schools. Because of that much of the time they can be caught on big topwater plugs like giant poppers and super-sized walking sticks but those lures didn’t work when we were there so we trolled for them with a three way swivel rig call a Mojo Rig.

I’ll give you the basics: We tied a 2-ounce Williamson bucktail jig on a short leader off one ring and a big swimbait — a Berkley Powerbait Pro Shad or a Ripple Shad — on the longer leader with lead core line, and sometimes we used steel leaders. Of course we attached our main line to the third ring. We fished over about 40 feet of water with our baits running at about 20 feet, halfway down.

The blue fishing was really tough. For a while I didn’t think we were going to catch one but I never give up, and that’s a good thing because we finally did manage to get one. And, it was a serious one that weighed right at 20 pounds. That’s a quality blue by any definition.

So, the test with FISH MY CITY WITH MIKE IACONELLI on NAT GEO WILD is to see if we can catch at least one fish from each of our three target species in a metropolitan area somewhere in the world. If we do that, we win. If we don’t do that, we lose. We won in New York City.

Next week — the show will air on Friday, October 19th — we’re going to fish London, England, for English pike, barbel and European yellow perch. Stay tuned to see how we did!

FYI: We had just a little extra time on our New Your trip so we went to Central Park and fished the ponds for largemouth bass. We caught 10 or so up to 3 1/2 pounds fishing The General, a 5-inch Berkley Powerbait, wacky style. We rigged it with a VMC Neko hook and a VMC O-ring.

Wondering how to catch bass? Did your fish disappear? This is a great time of year if you know where to look! Bass are incredibly predictable in the Late Summer and Early Fall so use these tips to your advantage. In this video we break down where the bass position, the best time of day to target them, as well as a few confidence baits to make your life easier.

By focusing your efforts during peak times you maximize your time and avoid a great deal of frustration. Intentionally focus on reaction baits early and late with your biggest push at finesse between 9 and 11 AM. The early afternoons are typically a bit slower this time of year so don’t let the lull in action discourage you from continuing into the evening.

We have a few key confidence baits that we lean on through the transition. Those baits are outlined below…

Boat buying doesn’t have to be a gamble! With these quick tips you’ll know exactly what to look for the next time you’re shopping for a used boat. From motor issues to water leaks, transom cracks to hidden damage, we cover all the issues that might arise.

The two most important factors when shopping for a used boat are the compression numbers on the motor and the experience you have while test driving. There are a lot of other factors that we’ll cover in this video but those are the two keys that you never want to skip. There are a lot of flaws that a seller can hide but if you get the diagnostic report and drive the boat virtually all of the hidden concerns will make themselves known.