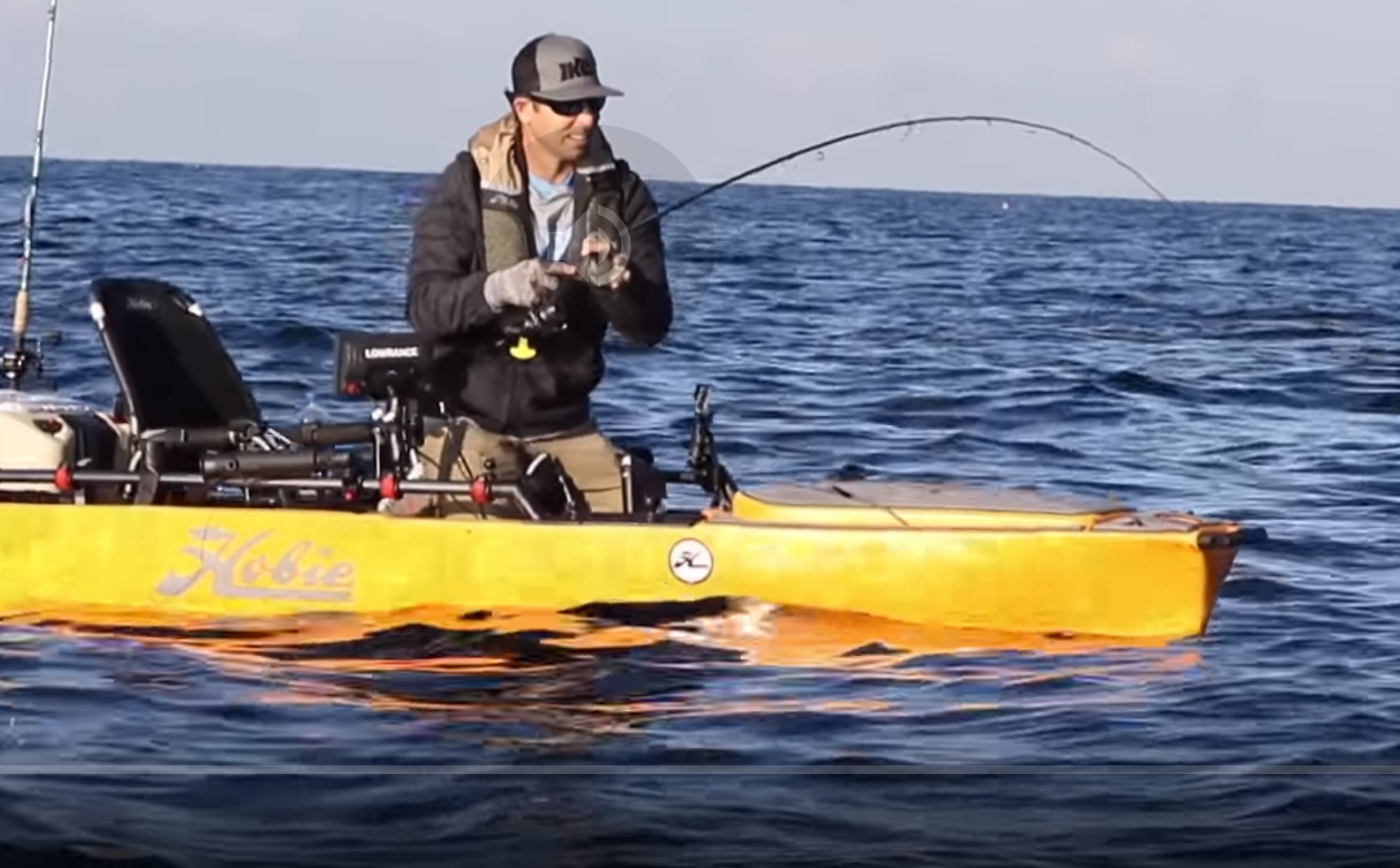 I’ve been out in San Diego, California, doing some saltwater fishing for my new TV show. We’ve been using jigging spoons, but in two ways besides just letting them fall to the bottom and then jerking them up or snapping them at a predetermined depth. So, for this blog the term jigging spoon is a little misleading.

Early in the morning when the baitfish are up on top we’ve been casting them out and holding the rod tip real high as we cranked them back with an occasional twitch of the rod tip. They work really well for that kind of fishing.

Later in the day, when the sun was up higher, the baitfish would drop down and so would the fish that were holding under them. When that happened we’d let our spoons drop down to where the baitfish were — one foot per second — and then bring them back the same way except that we’d hold our rod tips lower to help keep our spoons down.

Finally, in the middle of the afternoon when the sun was high and it was getting hot, we fished them in a more traditional manner, snapping them up off the bottom.

A lot of anglers think only of jigging spoons as jigging lures. But they are much more than that. They’ll do the exact same thing in freshwater for you that they did for us in saltwater. All you have to do is pull them shallow and horizontal early, pull them deeper and horizontal in the late morning and pop them off the bottom in the afternoon.

I’ve done everything I’m describing to you here in Bassmaster Elite Series tournaments. It will work for you just like it has worked for me.

My choice for a jigging spoon is the Molix Mike Iaconelli Lover Spoon. My usual preference is the 3/4-ounce size. It’ll cast a mile. It’s as tough as a 10 penny nail, and it looks like the real thing. But, good as it is right out of the package, I make two modifications to it that make it even better.

First, I replace the back treble with a feathered one. (I don’t mess with the two prong front hook.) I don’t really know why but this makes it more effective. And, I never tie directly to the lure. I always add a split ring or a snap to the line tie. That gives it just a little more action, especially when it’s moving horizontally.

My Lover spoon comes in 5 colors. The best color is the one that most closely resembles the local forge where you’re fishing. This is a reaction lure but it needs to look natural. Color is a big part of looking natural.

PS: If you want to have as much fun with a spoon as I had out in California, fish one out of a  Hobie Mirage Pedal Kayak. You’ll be right down at the fish’s level. There’s nothing better than that. 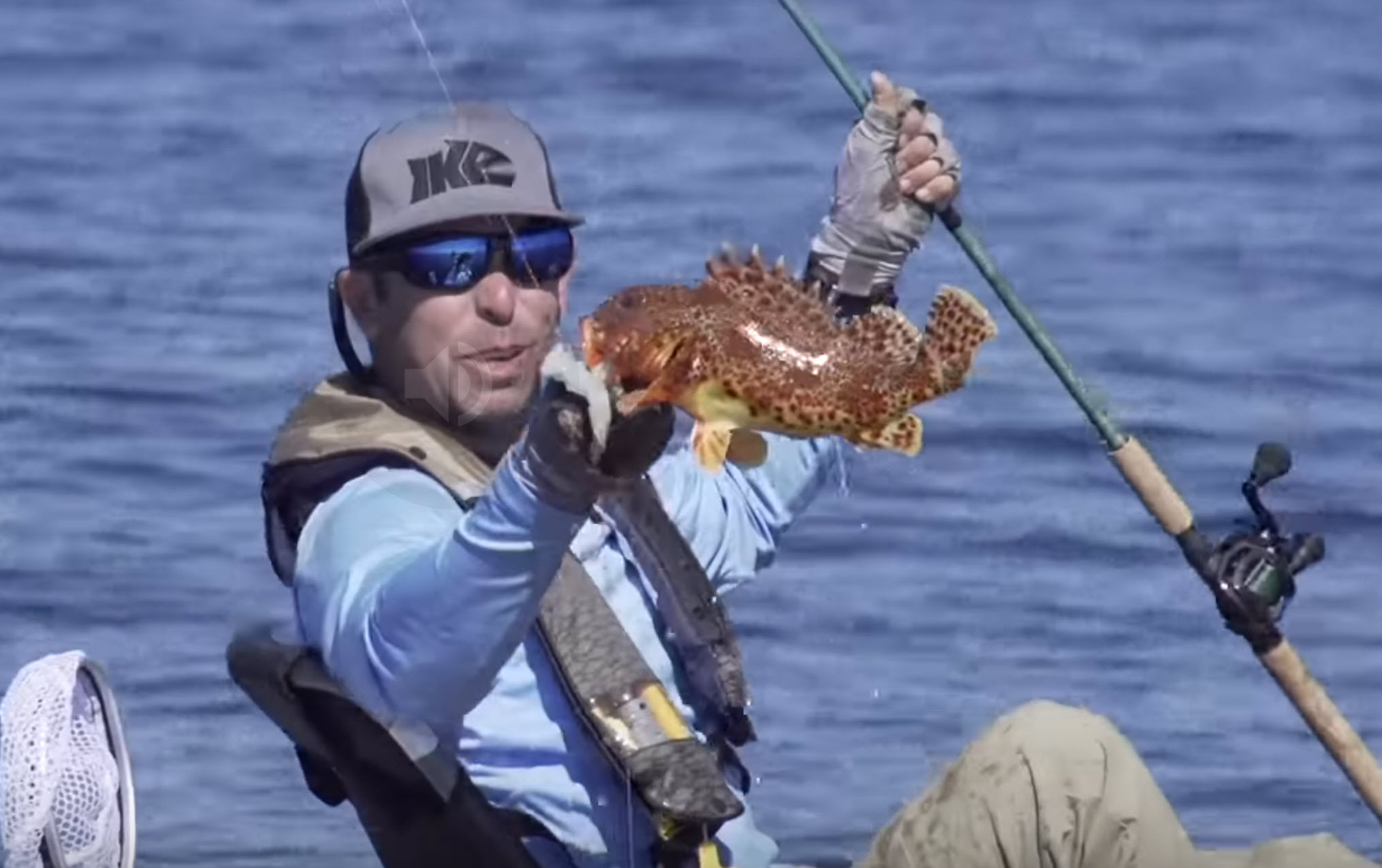 And here Mike talk about the jigging spoon: 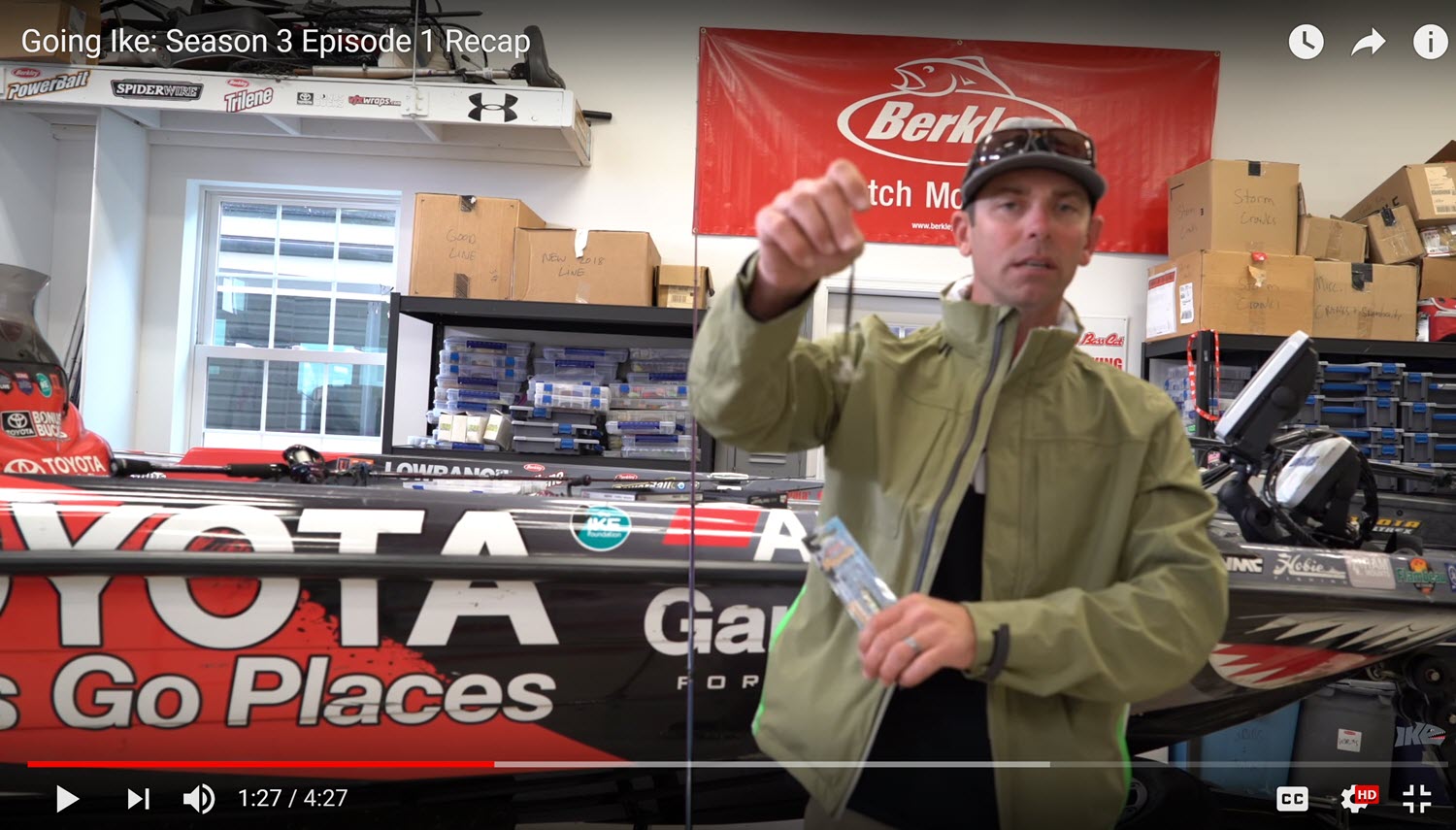 Nautilus Reels has announced a limited edition “No Pebble Mine” reel, which in collaboration with the S. Kent Rockwell Foundation will help raise money to assist the fight to protect Bristol Bay. Read more in the press release below.   … more → 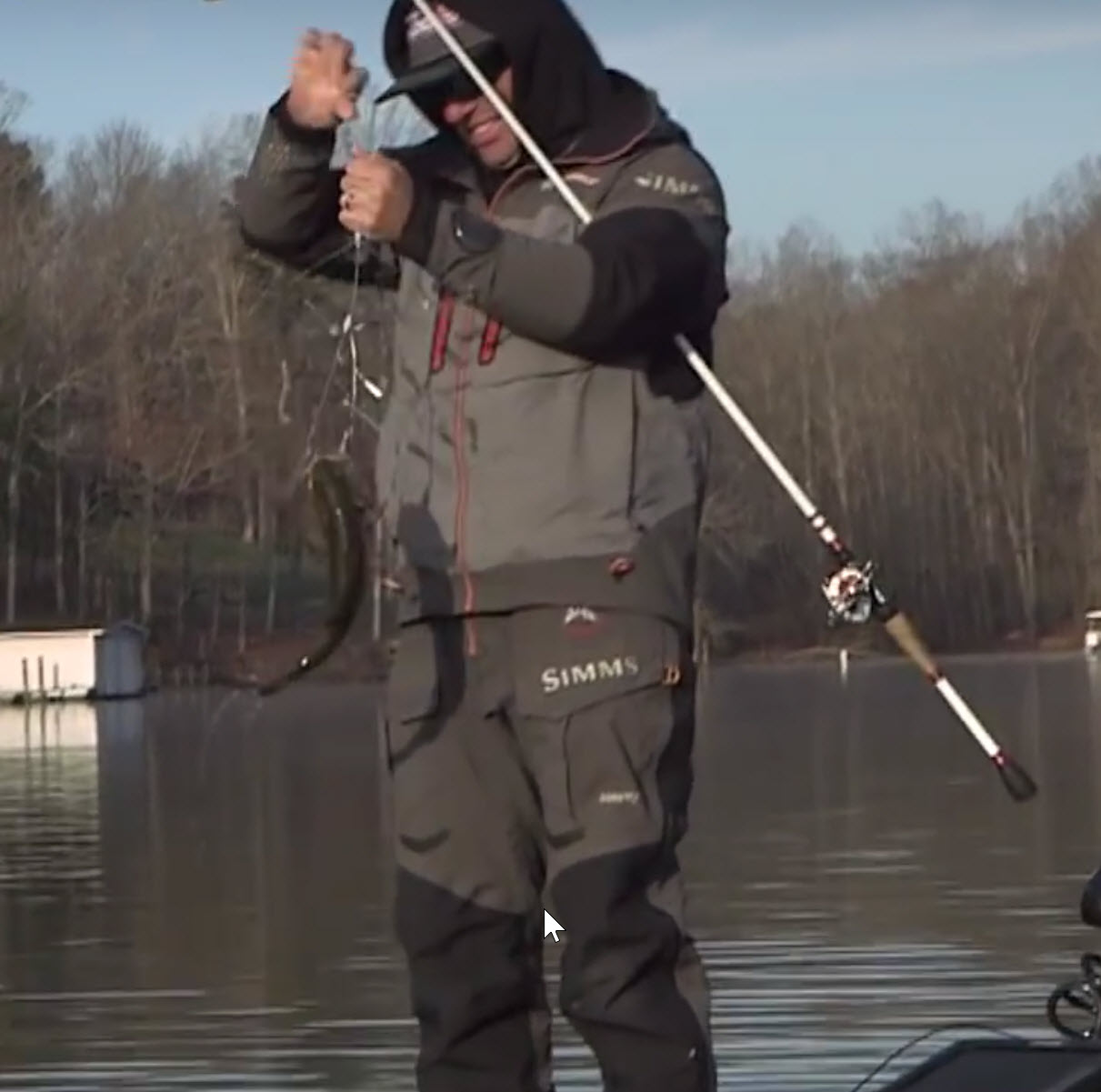 If you’re even half-serious about bass fishing you should learn to fish the umbrella rig. It’s somewhat controversial but in the end it’s a real fish catcher, controversy or not.

However, let me give you a warning before we go any further. Some tournaments allow it, some don’t. And, the number of hooks that you’re allowed to have on one rig or rod varies widely from one state to the next. Make sure you know the rules before you start throwing it.

Another thing: Right now, on Going Ike! I’m fishing one with Britt Myers. Check it out if you want to see some real action.

With that out of the way let’s get started.

The umbrella rig is at its best in the early spring and in the late fall. That’s when bass are seriously relating to baitfish, and no lure or rig on the planet mimics a ball of baitfish better than an umbrella rig. It’s a crazy looking thing with its mass of wire and turning blades but it absolutely mesmerizes bass when it’s rigged properly.

Proper rigging means starting with the right harness. My choice is a Shane’s Rig.   (I’m not sponsored by them. Nevertheless, it’s the best one I’ve ever used.) I like the ones that can be rigged with anywhere between five and 10 lures.

My favorite head is a VMC Darter Head, and I don’t worry much about the color. I’m partial to the 1/8-ounce weight but at times I will go up to 1/4 ounce. I rig everything except the one in the center with a small Berkley HAVOC Beat Shad. I always pick one that looks like the local shad — white, gray, smoke, ghost or whatever.

On the center head I use a Berkley PowerBait Hollow Body usually in a Hitch color. I use this bigger bait, and in a different color, because I want to create a target for the bass. If they’re moving in on the center lure, they’re more likely to grab an outside lure during an attack, a feeding frenzy or just out of desperation

Note: My tackle does not include a heavy saltwater rod and reel and I’m not using rope for my fishing line. That is totally unnecessary. Don’t overdo your tackle. Use medium-heavy bass tackle and you’ll do just fine with an umbrella rig.

The only thing you do when you fish an umbrella rig is throw it out and wind it back. Vary your depth in the water column until you find them. I suggest you hang on after that.

Step one in our bass boat retrofit is a new trolling motor. We’re upgrading from the Maxxum Pro to an Ultrex 112. Matt explains each step of the process as he shows just how quickly and painlessly these motors can be installed. Start to finish the installation takes less than an hour.

If you’ve considered the Ultrex for your next trolling motor its definitely worth the investment! Once you’ve experienced spot lock, heading, and a few of the other features there really is no going back. It adds an incredible level of convenience to your day on the water.

We use the 112 lb with 52″ Shaft. If you are combining with Humminbird Electronics be sure to use the “Link” version of the motor so you gain all of the available features.